Situated on a disused dockyard in East London, close to London City Airport, is Royal Albert Dock. This new 35-acre business hub, designed by Farrells architects for client ABP (London) Investments, will become London’s third business hotspot – but it’s not the location that makes Royal Albert Dock so unique: Phase 1, circa 650,000 ft², of this huge project, was constructed and completed in just under two years. The AKT II project directors, Steve Toon and Ione Varela outline how a project of this scale was constructed with such speed.

Prior to ABP’s purchase of the land from the GLA, the historic east-end waterfront, although left empty and unattended for decades, was previously renowned for its links with trade and commerce. During the Second World War, the docks were heavily targeted in air raids, meaning that the potential risk of encountering unexploded ordnance was high. Foundation construction was carefully managed and monitored throughout by all the teams involved. 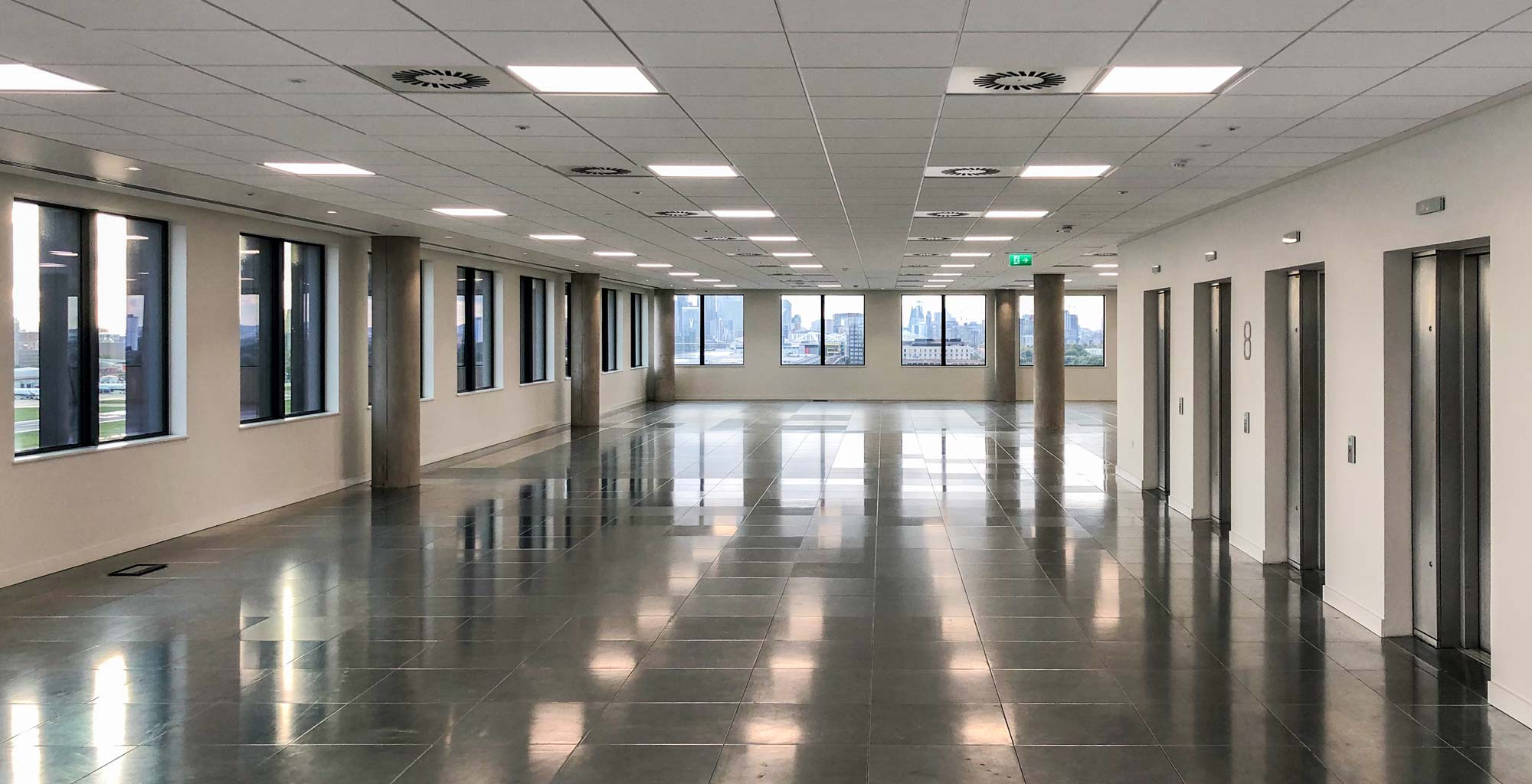 Before construction began, it was discovered that one of the UK’s most threatened species of invertebrates were living in rubble mounds scattered across the site. The streaked bombardier beetles were carefully relocated under the guidance of ecologists to other areas of the site, prior to work commencing. 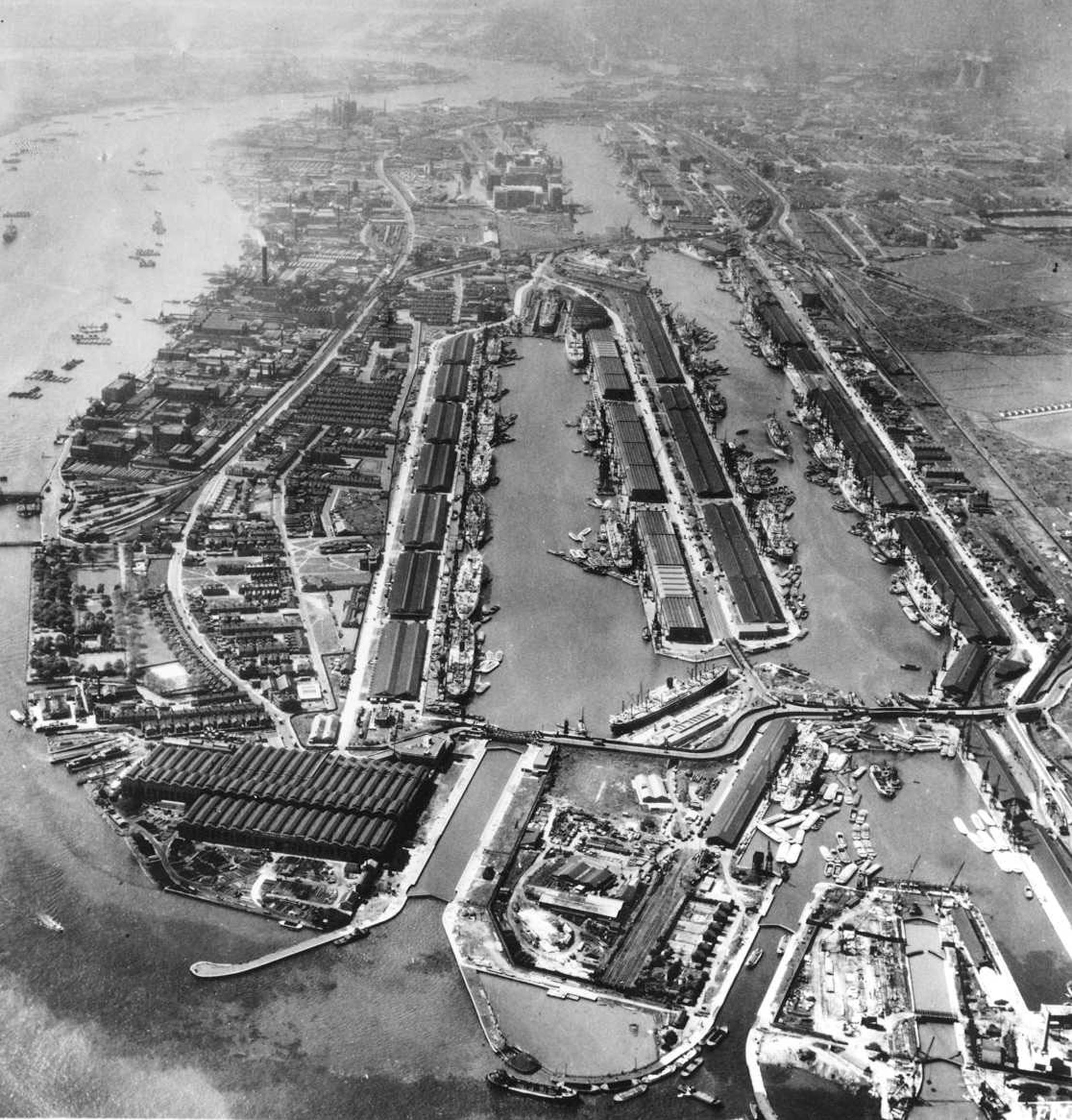 The Royal Albert Dock site is remarkably well connected but at the start of the project it was also isolated: there were only two low-rise unused listed buildings standing in the centre of the 14-hectare site. The client wanted this changed, quickly.

The total site to be developed is 1.2 km in length running parallel with London City Airports’ runway, yet only 150 m wide creating a very long yet narrow plot, which inevitably limits options for the urban design and building massing. Similarly, the proximity to the airport – the centre of the runway is only 200 m from the sites southern boundary – imposes limitations on building height and construction methodologies. In addition to the airport, two DLR stations are on the site’s doorstep, making it incredibly well connected and part of the draw that brought ABP’s interest to the site and its development opportunity.

Being the successful bidder in acquiring the site from the GLA, ABP, led by the ambitious and charismatic Mr Xu Weiping, and with support from their London based development managers Stanhope moved quickly to develop the masterplan, design and acquire planning so they could start to capitalise on their first UK development project. 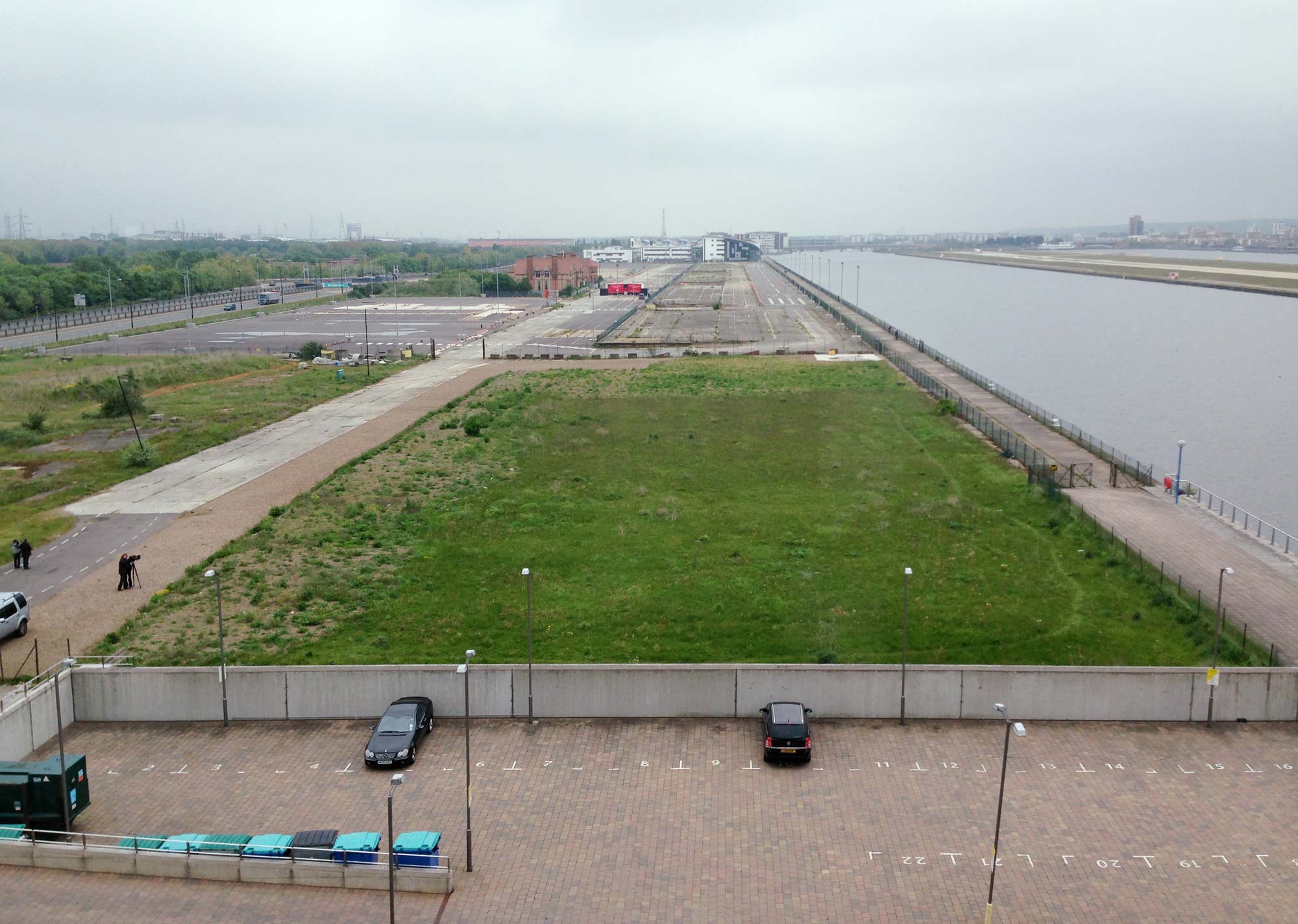 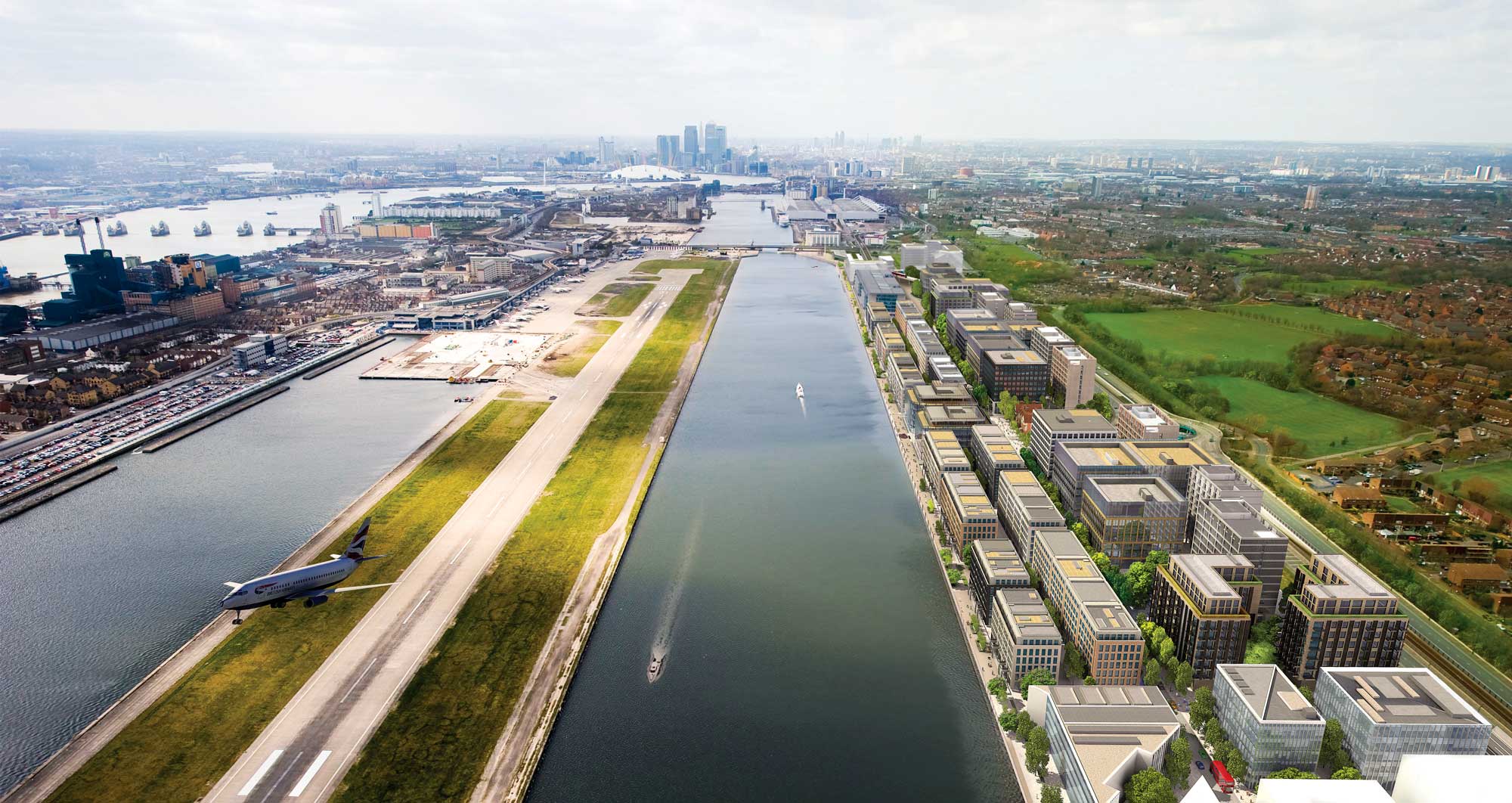 The drive behind the design of Royal Albert Dock was to transform this disused land into a business district not just for London businesses but also a gateway for Chinese and other Asian businesses that sought to establish headquarters in London.

One of the key challenges in creating a business hub in a regeneration site is that, in order to attract potential tenants, a critical mass of facilities needs to be reached as early on as possible. ABP has a wealth of experience developing business parks in the Far East, where their pace of construction is much faster than in the United Kingdom.

ABP’s challenge for Phase 1 was to populate it with buildings, new streets, car parking, landscaped areas, energy centres, ancillary buildings and all associated infrastructure as quickly as possible. The design team, in collaboration with the Chinese contractor CITIC and their UK partner Multiplex, took on this challenge to deliver the first five commercial buildings with unprecedented speed of construction, and this meant that great emphasis has been placed in standardisation of details, the efficiency of design, modularisation and prefabrication. 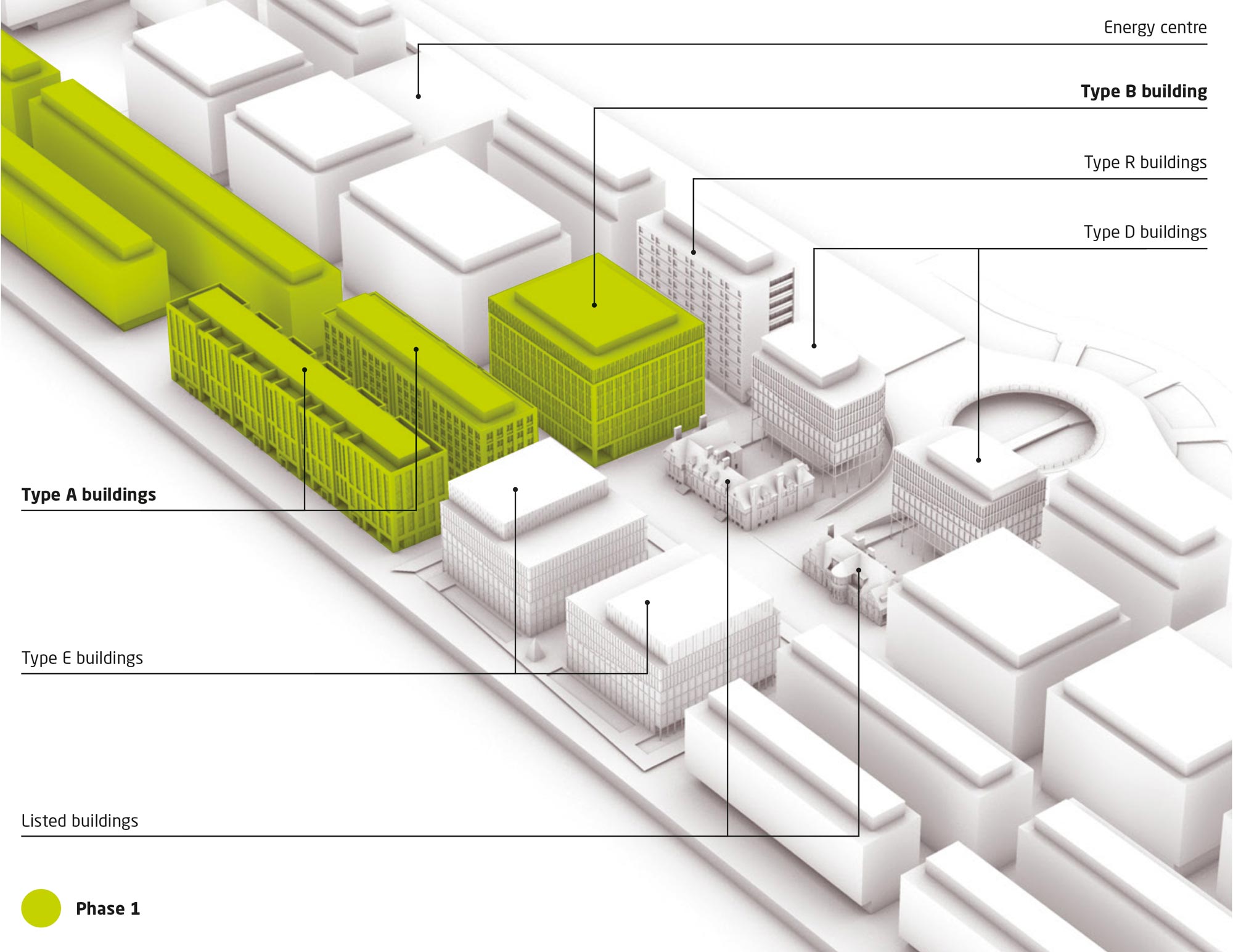 The buildings are designed to be as flexible as possible for the future tenants – the Terrace Buildings (or ‘Type A’ buildings) nearest to the dock contain smaller, more compartmented floor plates for small- to medium-sized enterprises, whereas the ‘Type B’ building  (Altitude Building) nearer to the DLR station has a larger open-plan floor plate with a central core that can be let as a whole or in a split tenancy arrangement. Demonstrating the diversity in the office floor plates on offer, a smaller Type A floor is as little as 2,400 ft² net, while the Type B floors are cc. 15,000 ft² net.

The key design and structural challenges for the Royal Albert Dock project were around driving efficiency and standardisation. The market position of this new development and anticipated rental values put efficiency at the heart of everything the design team did. For both the Type A and Type B buildings, numerous floor plate/core positioning options were assessed to ensure the design team had left no stone unturned in maximising value with the best design solution and office floor space to offer.

The adopted floor structure solution for both typologies was selected as PT flat slabs.  A key design challenge was keeping the building heights below the City Airport instrument landing system (ILS) and emergency flight path envelopes, thereby minimising the structure / environmental floor sandwich whilst hitting required clear floor heights was fundamental. Thin PT flat slabs were proven to be the best solution overall to meet this height demand whilst creating the required grid and clear spans for the office floor plates. These demands in height tended to negate the option for a more prefabricated floor construction, although these were considered in detail.

The buildings themselves are relatively simple structures, as their massing is constrained by the site aspect ratio and height restrictions as discussed above. In addition to this, creating basements on the Type A buildings, which are immediately adjacent to the dock, was not economically viable. Only the Type B buildings, closest to the DLR, have a partial basement.

In order to build the frames quickly, all buildings’ post-tensioned flat slabs had the temperature of the slab curing monitored in real-time in order to determine when sufficient strength gain was achieved to carry out the pre-stressing operation at the earliest possible opportunity. All columns are precast to speed up construction. The ten cores for the four Type A buildings are precast using the twin-wall system, whereas the single-core on the Type B building was constructed in traditional in-situ construction but using a slipform for speed.

The choice of foundation system was dictated by the soil conditions, but given the sheer number of piles to be installed, the strategy was to utilise readily available contiguous flight auger rigs and restrict pile diameters to 750 mm and 900 mm, which are easier to drive into the ground and deal with potential buried obstructions. The building façades are formed from precast panels with brick slips cast on, whereby negating hand-set bricks and scaffold. We developed the panel sizing, load paths and support system with Farrells and the contractor to achieve the best design and value from this system.

The result: five buildings erected within a year from the official groundbreaking to topping out.

With Phase 1 completed and Royal Albert Dock open for business, the new development is set to provide 20,000 full-time jobs to the local area of Newham as well as house both national and international businesses in a location with excellent transport links, breathing life into the historic dockyards once more.