It’s common knowledge that engineers like columns. As the ‘marmite’ of the built environment industry, both clients and architects sometimes feel that columns can be limiting to their developments and designs, respectively. Often, engineers find themselves trying to hide them even or remove them. But AKT II wants to celebrate the integral structural element. Design Director Martin Ocampo makes the case for columns as an element that should be celebrated. 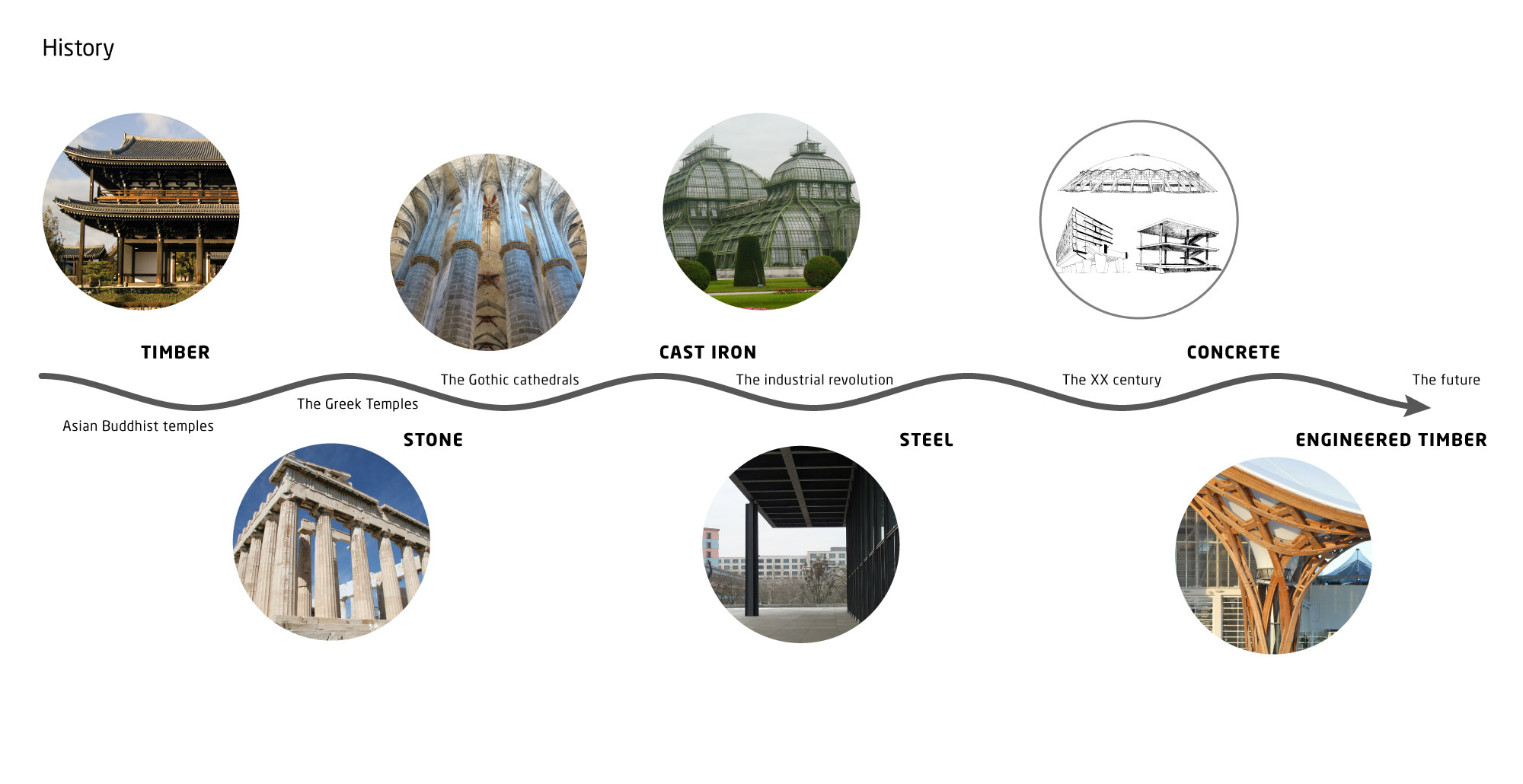 ©
© AKT II
The history of columns

Some of the first human dwellings were platforms; platforms to congregate around, to carry out rituals, to prepare food. And so, the column provides an extension of the platform to form a shelter.

The prehistoric parent of this column is a tree – a circular prestressed timber trunk with a network of cantilever branches with outwardly decreasing bending inertia that support a lightweight tensile canopy of leaves. Columns in the classical period appear less important in keeping the elements out as raising humanity past those elements to the gods. Temples and cathedrals: stone steps and platforms and columns designed to lift humanity beyond animal survival on this earth.

The column is almost worshipped in this form. Centuries later, the column once again lifts humanity into a golden age of modernity. Mies and Gropius, Le Corbusier, The Chicago School: without the column there would be no high-rise, no streets in the sky, no lifting humanity above the urban fabric and up once again towards the gods above.

At what point then, did we start to decouple the column from our building history? At what point did it become a problem, a thing to be avoided or removed? We are entering a new age of building design, one that must sit within our planetary limits, and work alongside nature. Building reuse, engineered timber, natural materials. Perhaps it is time to look again at that prehistoric column – the tree? 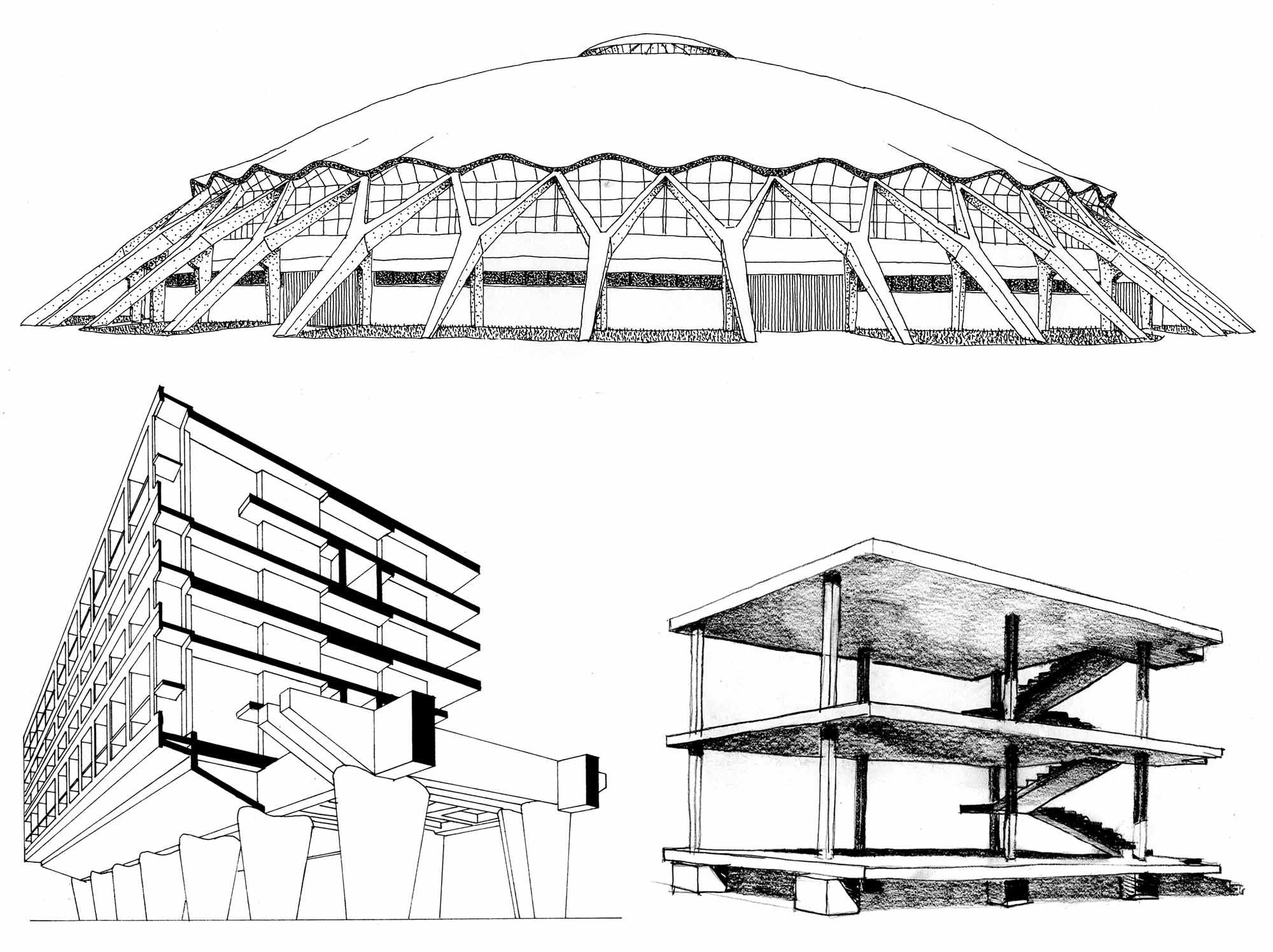 If the column’s original function was to provide shelter, it very quickly evolved into something else entirely. Throughout history, there are examples everywhere of columns lifting temples and places of worship out of the ground. They have little practical purpose beyond holding up a roof high over our heads. It existed to create spaces of wonder, spaces that lifted humanity beyond the basic need of shelter and survival.

The function of the column evolved beyond practical considerations, but it remained a necessity to enable such spaces of worship. And so, these columns were celebrated as decorative elements, and the form evolved – Doric, ionic, Corinthian forms and so on. 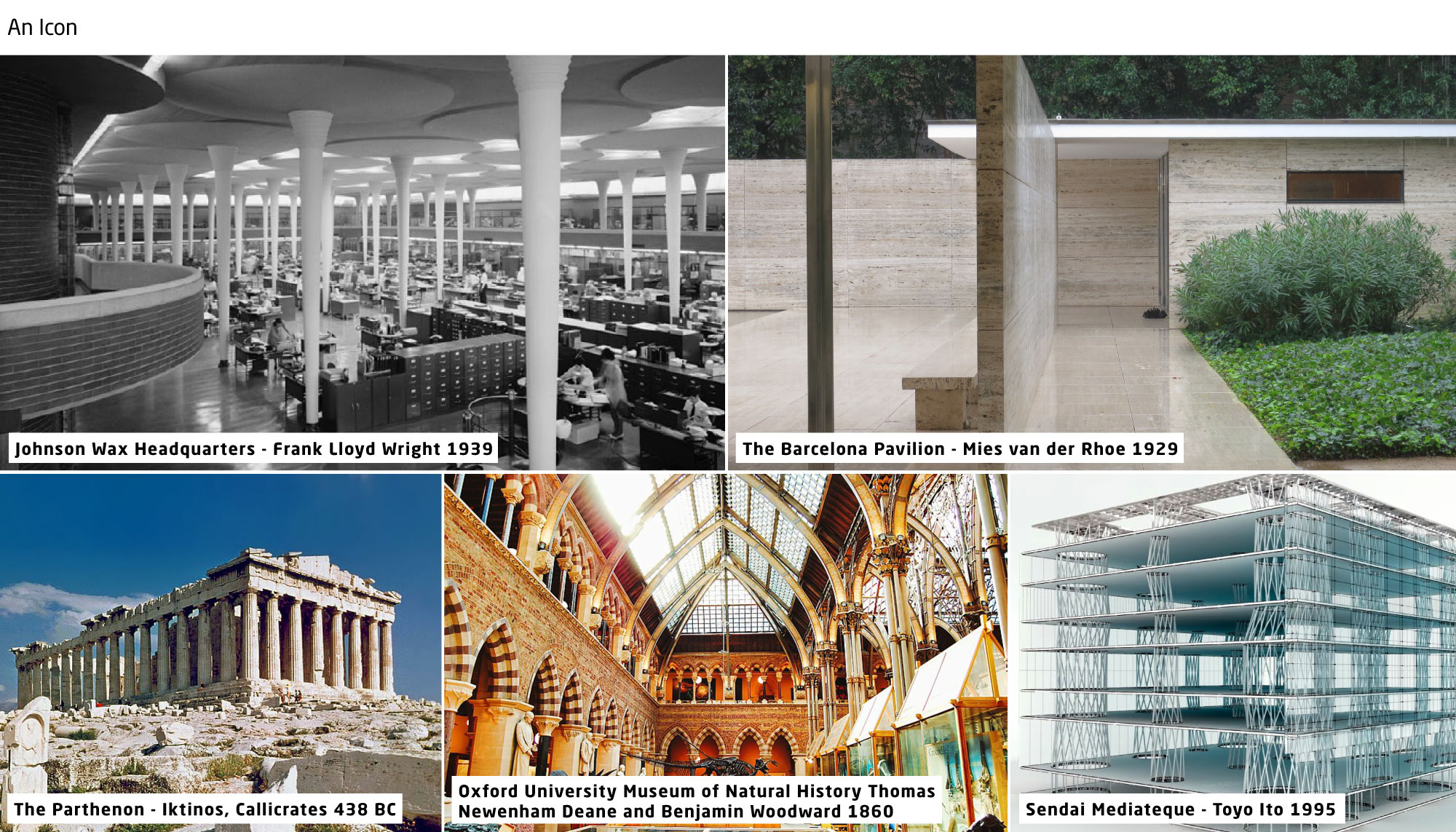 The birth of modernism happened at a time of technological as well as demographic transformation. Steel and concrete transformed the way we build, but it was the column that allowed architects such as those of the Chicago School to stack structures on top of each other in a dense urban environment. 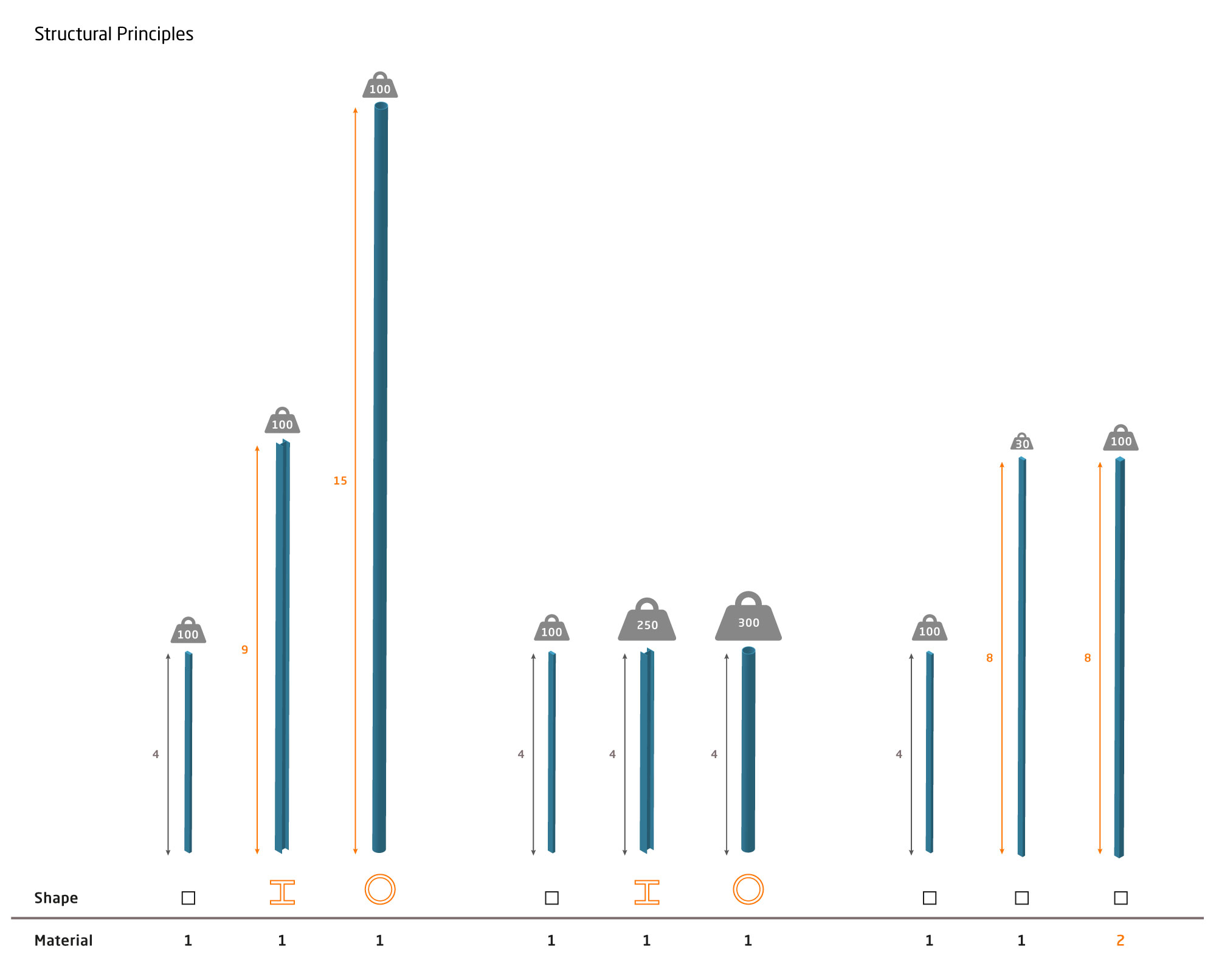 Just as the classical column form was celebrated, the modernists also embraced their column. It was like a functional equivalent of the columns holding up the great temples and cathedrals of bygone times. Regular, clean structural grids punctuated by columns. And whilst these columns are focal points that split up the space, they do not divide or segregate the space.

The most iconic column in modern architecture is perhaps Mies’ cross-column supporting the flat roof of the Barcelona Pavilion. Here it was celebrated, punctuating the space without dividing or separating it. 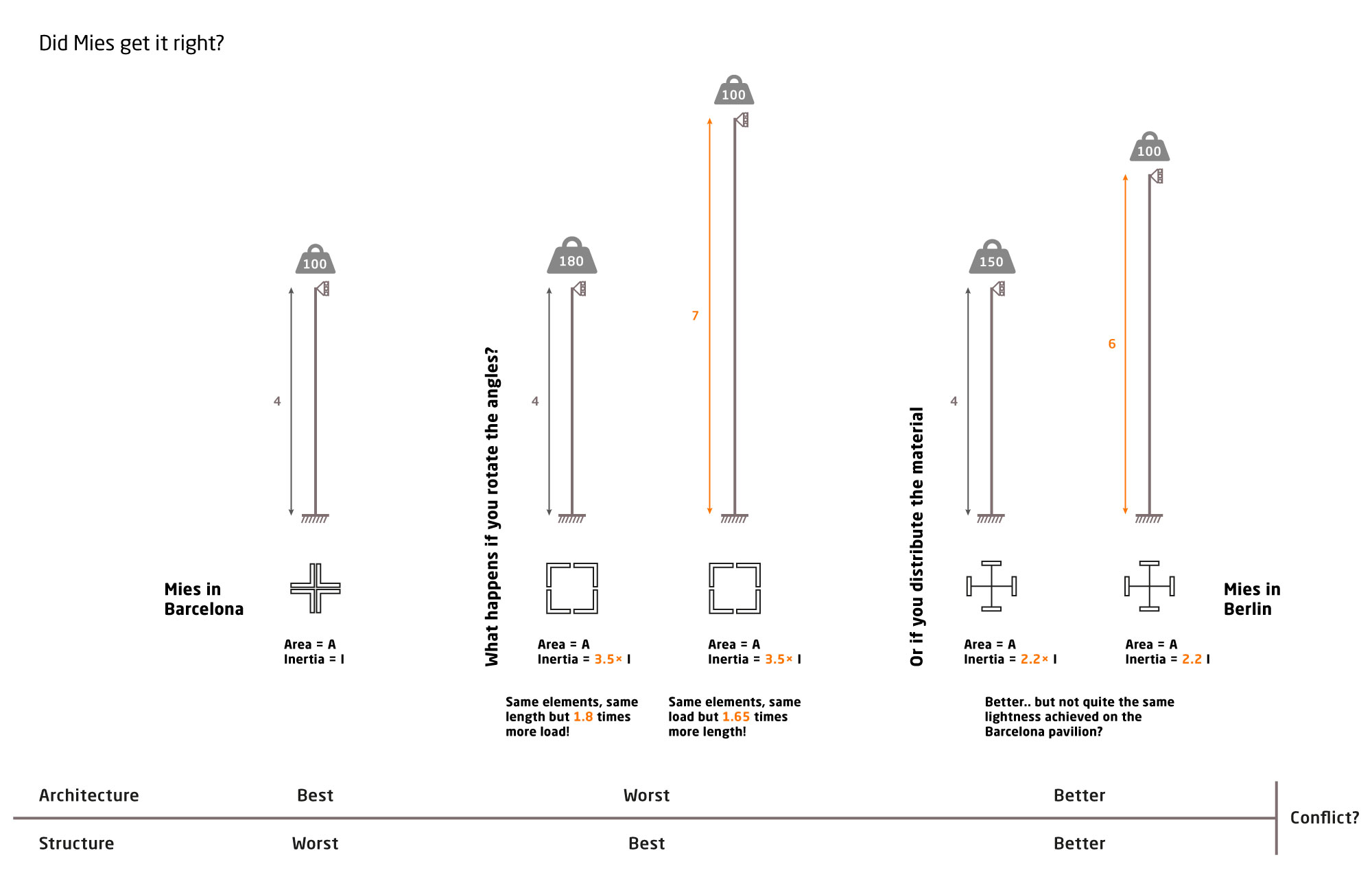 So why do we avoid the column? Why do we hide them? Why do we always seem to find ourselves trying to remove them and why is it missing in Rem Koolhaas’ enormous book on Elements of Architecture. Does a lack of columns really provide flexibility? Anyone who has ever visited the Barbican, the Tate Modern, danced in a warehouse or at the Roundhouse in Camden or at Glastonbury festival will know that columns (as well as poles), provide points of focus to come together around, they are absorbing and captivating. They break up a space yet do not divide it or separate it. 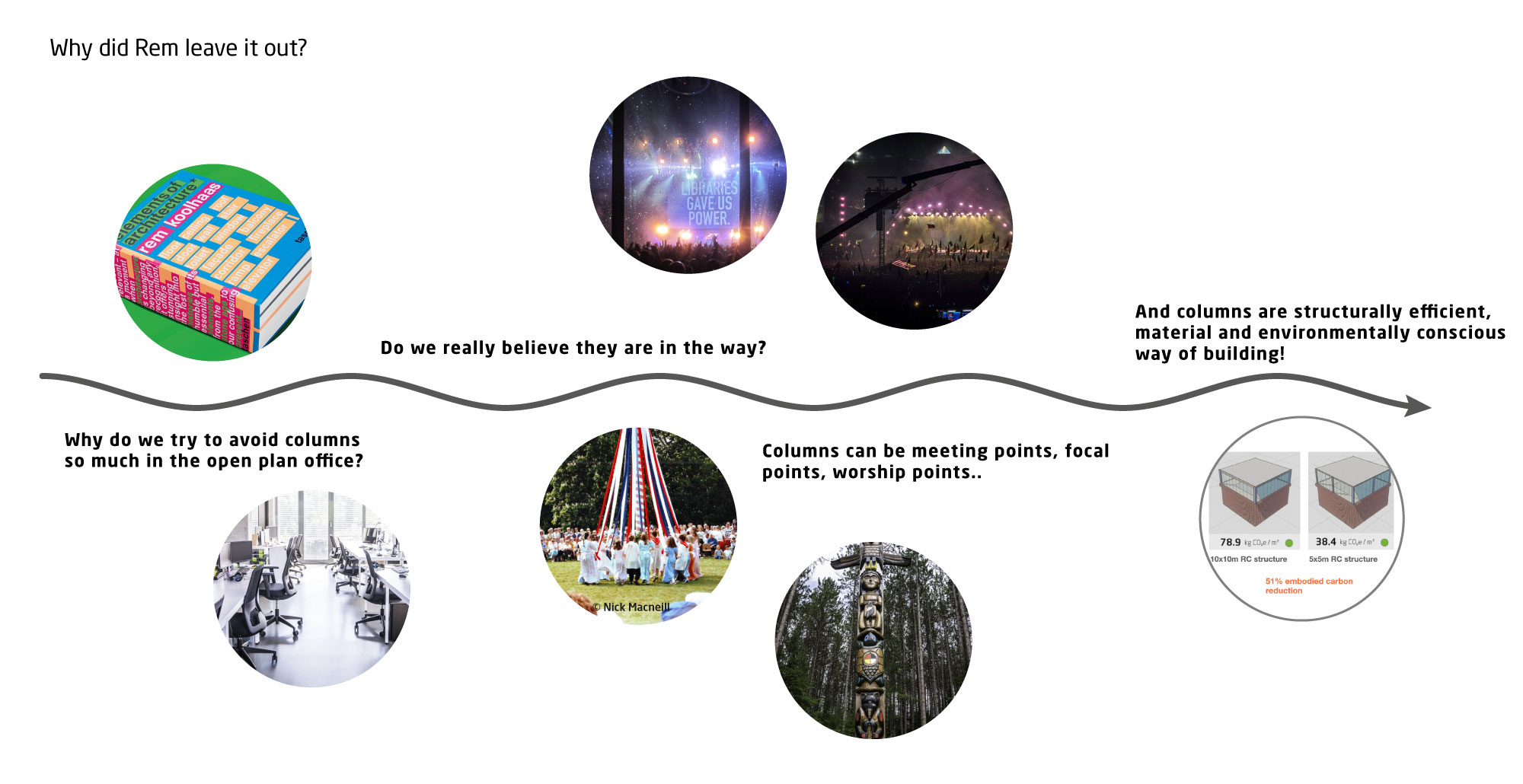 We are becoming painfully aware that our pursuit of technological progress – long spans and tall buildings and fast construction – is coming at the expense of the environment and its planetary boundaries. Returning to a prehistoric column – the tree and its environment, the forest – returns us to a more efficient and more honest way of building. We are not trying to cheat nature with technology, we are trying to work with nature, in age of engineered timber and natural materials. Let’s celebrate once again, the column as an architectural and structural element.